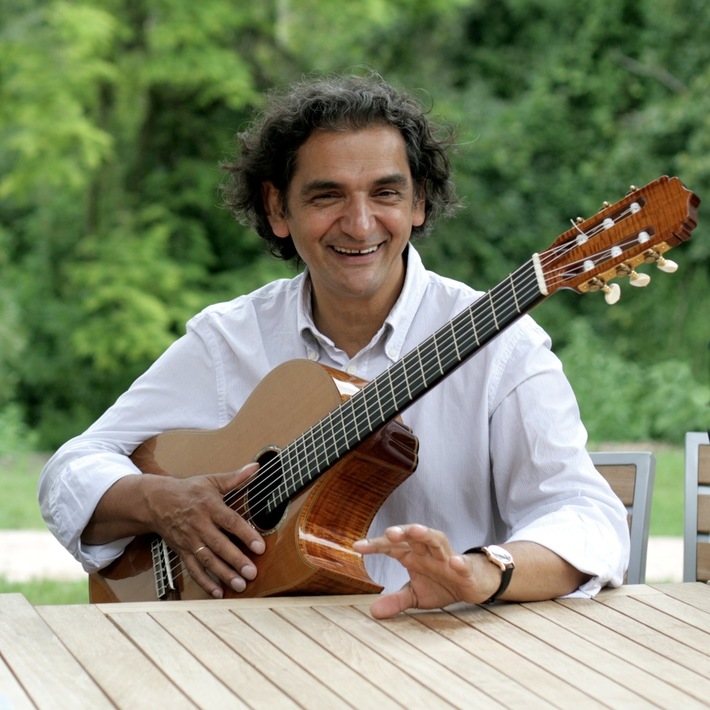 Snetberger has not received any gifts yet

Who invited you ?
Els de groen

Born in 1957 in northern Hungary, guitarist/composer Ferenc Snétberger was the youngest son of a family of musicians. Early on his father, a guitar player also, became his role model. Snétberger studied classical music and jazz guitar. Today he is best known for his art of improvising and his crossing of stylistic borders. His music is inspired by the Roma tradition of his home country, Brazilian music and flamenco as well as classical guitar playing and jazz. He made numerous albums as a leader, co-leader and sideman and has toured all over Europe as well as Japan, Korea, India and the United States.
In 1995 he composed his Concerto for Guitar and Orchestra, "In Memory of My People", on the occasion the fiftieth year following the end of the holocaust. Inspired by melodies of the gypsy tradition, the concerto is a powerful statement against human suffering. It has been performed by the composer himself with chamber orchestras in Hungary, Italy and Germany and also at the New York UN headquarters (International Holocaust Memorial Day, 2007).
Ferenc Snétberger performed Luciano Berio's Sequenza XI (for solo guitar) as well as concertos with orchestra by Vivaldi, Rodrigo, and John McLaughlin. He also wrote music for film and theater. On stage he performed with David Friedman, Dhafer Youssef, James Moody, Trilok Gurtu, Pandit Hariprasad Chaurasia, Bobby McFerrin and others. In 2002 Snétberger was appointed freeman of his birth town and two years later received the Hungarian Order of Merit. In 2005 he was awarded the Liszt Ferenc Prize in Budapest.

In 2004 Snétberger founded his new trio with legendary Norwegian bass player Arild Andersen and Norway-based Italian drummer/percussionist Paolo Vinaccia. With natural ease and on the highest level the three of them bring together choice compositions, technical skills, improvisational drive and musical fantasy. Released in fall 2005, their debut album "Nomad" was greeted with enthusiasm by critics and listeners.

In the same year Snétberger's performance with Bobby McFerrin at the Veszprém summer festival (Hungary) was recorded for the DVD "Snétberger live" (solo / duo with McFerrin / trio "Nomad"). In summer 2007 Snétberger was invited by McFerrin for further duo concerts in Germany and Spain.

Snétberger's cooperation with Markus Stockhausen started in 1999 with "Landscapes", a duo suite recorded for Snétbergers album "For My People". In three movements the musicians immediately create a language of their own showing their talents in an amazing way. "They come along lightly and yet filled with melancholy - and they give the impression that one day they simply HAD to meet in order to make this music happen. You can't help but hope this cooperation will be continued soon," Ralf v.d. Kellen wrote in Intro magazine. Eight years later during which Snétberger and Stockhausen have further been stimulating each other artistically, their duo album "Streams" finally proves their development.

In 2002 Snétberger was appointed freeman of his birth town,2010 of Budapest
2004 he received the Hungarian Order of Merit
In 2005 he was awarded the Liszt Ferenc Prize in Budapest.

It's so nice to see you here ! I really appreciate what you are doing with the school and your guitar work. I wish there will be a lot of schools like that in Europe and all over the world that kids can create there carrier and get educated. I hope to see you some time soon and possibly play with you.

Hello, I would like to invite you to our new group here at "Khetanes": ROMANO THEM TRANSMISSION - with which we want to share the great culture and arts of Roma. Please join this group. Thank you! Viola Razavi

I write to let know about plans for the Jubilee World Roma Congress taking place in London next summer [1-5 August]. For the first time it will be possible for all members of our communities (over 16) to vote electronically in the elections in connection with this Congress, and whosoever wishes to stand as Candidates.

Democratic Transition will bring greater legitimacy and accountability and a democratic process allowing all to participate and work together for better recognition of the Roma Nation and the defeat of "anti-Gypsy" racism.

Now you may be enrolled as a Voter (if you wish to be for more information or to be removed  email  Romvote@gmail.com)