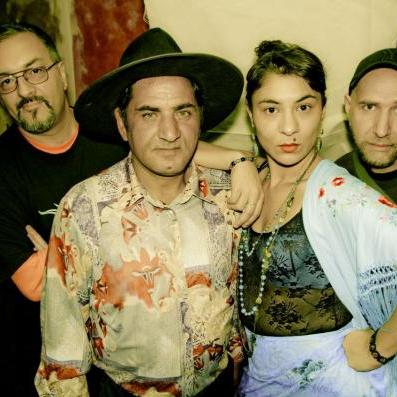 Shukar Collective has not received any gifts yet

Who invited you ?
Els and Ema Dei

The Shukar Collective was born from the meeting of new generation musicians with the gypsy traditions of Shukar founders Napoleon, Tamango and Clasic. Shukar play ursari music (ursar means bear tamer or bear handler) using spoons, wooden barrels or darabouka to create a powerful and urgent sound that is emotional and soulful at the same time. Urban Gypsy combines Shukars original ursari music with the new technology of the collective, resulting in their distinctive sound.

The inspiration for Shukar's music comes from the distant past, when the Tatars and Mongolians invaded Dacia (Romanias ancestral name). Shukars vintage original sound is called ursari music (ursar means bear tamer or bear handler) a few men sing, shout and play percussive instruments while a bear dances around them. This practice still goes on in some countries unfortunately, although Shukar gave up this awful custom many years ago and are now only concerned with the sound aspect of the ursari experience. The music is very powerful and aggressive but emotional and soulful at the same time. When they perform, Shukar use primitive instruments such as spoons, wooden barrels, stones or darabouka.

The Shukar Collective idea came about after Lucian Stan and Dan Handrabur heard some original Shukar tracks presented by Paul Tanicui (Shukar's Manager) and saw them perform in a well-known Bucharest jazz club. The idea behind the project consisted of re-orchestrating these fabulous folkloric pieces with current technologies, while preserving and emphasizing the original aspect. The result is what you are listening to right now.

Shukar Collective started purely as a musical project out of love and respect for traditional ursari music, the music of street performing bear tamers. It wasnt long before we decided to bring two very different cultures together. We wanted to bring together rroma singers with a group of musicians and deejays to form Shukar Collective.
On the one side of Shukar Collective are the rroma singers, often incorrectly called gypsies, from rural, sub-standard living conditions (even by eastern European standards), who work in terrible conditions for meager pay and have to feed large families. But they have passionate ursari music that is tribal, almost primitive, always changing and continually emotive. On the flipside is us, a group of musicians and deejays who have been active on the Romanian and international scene for a number of years. We are all individuals with various different approaches to electronic music, work and life...
After an initial period of recording and production, our lives began to intertwine with those of the rroma singers. Since they live 40km out of Bucharest we each had to take turns helping them out for instance we often had to take it in turns to drive them so that they could appear on TV, do a radio jingle or play at a club. We also bought one singer a TV and even a horse.
The fusion between the rroma musicians and the deejays had started; in less than a year we started playing festivals in Europe as Shukar Collective. ..After a very short period of time we witnessed an amazingly positive transformation for the life of the rroma people. Our musical experiment continues in a multicultural society and we look forward to the integration of rromas in our modern day society not only in music and technology but also coming about through real efforts for social change.

Warm welcome to our site!

Many thanks for joining us. We gladly invite you to share your music with us and, please, also photos. In the profile to begin with. We should not look all alike ;)

Thanks for the friendship and the nice photo!